Sorry folks, I’ve been out of town helping a friend with a small wedding party, so I haven’t touched the blog for a week.
I’ve missed a lot, and much has already been posted on Boots & Blades, but here are some highlights:

“This is fantastic. I’ve always been a big fan of the Torchlight Parade,” Ohno said in a satellite interview with KIRO 7 Eyewitness News anchor Chris Egert. “I’m excited. I’m a hometown boy.”

Ohno, America’s most decorated winter Olympian with two gold, two silver and four bronze medals, said the event is one of his favorites every year.
“It’s always a big honor to be associated with something like this,” he said.

Ohno was Torchlight Parade Grand Marshal in 2002, the same year he won a gold medal in the 1,500-meter and a silver medal in the 1,000-meter short track events at the Winter Olympics in Salt Lake City.

He has been busy with foundation work, writing a book that’s due out in the fall, acting in movie projects and motivational speaking.

He spoke with Egert about his future in skating. See the full interview here

SLIDESHOW: Apolo Ohno Through The Years

To See all the video, photos and interview, go to this link:
http://www.kirotv.com/news/24289074/detail.html 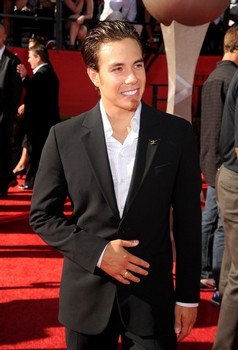 Shaun White won in Apolo’s category, but AAO’s still a winner in our book. Congrats Apolo on a Great Olympic Career. 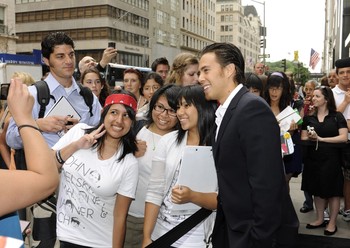 For more photos, go to this link:
http://mlb.msg.com/photo/07TZb6v66maHD?q=Apolo+Ohno

U.S. Speedskating: New boss says he is up to the challenge

Kearns » Maybe it wasn’t as grim as four years ago, but the scene that greeted Mark Greenwald when he started work last week as the executive director of U.S. Speedskating was hardly the most inspiring:

Let’s just say his first day on the job did not involve stuffing cash into briefcases at the Utah Olympic Oval.

But for all of the challenges facing U.S. Speedskating amid another chaotic round of post-Olympic shuffling, the 41-year-old two-time Olympian is hopeful and confident that he can smooth what has become a turbulent ride for one of the nation’s most successful winter sports federations.

“I’m here to make this organization successful and nothing else,” he said. “I want to build an unparalleled program to anywhere in the world.”

On the ice, it’s already close.

Speedskaters and short-track skaters accounted for 10 of the 37 medals the United States won at the 2010 Vancouver Games, after winning 10 medals at the 2006 Turin Games in Italy and 11 at the 2002 Salt Lake Games.

Many sports federations “would kill to have near that amount of medals,” said Brad Goskowicz, the president of U.S. Speedskating.

But Goskowicz also acknowledged a sense of disappointment after the Olympics, when several medal hopefuls did not live up to expectations and the federation fell two medals short of its goal.

Add the financial strain caused by a sponsorship drought amid the poor economy — the Dutch bank DSB went bankrupt last year, and Nike is among the sponsors that have not renewed their deals — the dismissal of most coaches and a hopeful but skeptical group of athletes, and Greenwald expects to have his hands full.

“It’s part of this job,” he said. “There’s a very high expectation to achieve. If you take a role like this, you know what you’re getting into when you start.”

He aspires to find new sponsors around the world, improve coaching development, reconnect with alumni and use his collaborative skills and sport-building experience — he was a longtime program manager and director at the Calgary Olympic Oval, before coming to Utah — to build an enviable program.

But first, he must hire a new high-performance director, figure out the budget, and formulate a plan for the build-up to the 2014 Sochi Games in Russia that the U.S. Olympic Committee must approve before it resumes its financial support of the federation.

Skaters have not received training stipends since the Vancouver Games, and many have grown frustrated with the seemingly perpetual changes.

“Rightly so,” Greenwald said. “They’ve been talked to a lot. So I don’t expect, just because I come in and I say this and that and everything else, that they believe me. I totally feel I have to prove myself, and I have no issue with that. I say don’t listen to what I say, watch what I do and see how I put my money where my mouth is.”

While the short-track program has maintained some consistency with the retention of coach Jae-Su Chun, the long-track all-rounders are on their fourth coach in four years, after two-time Olympic medalist Derek Parra was not re-signed — partly because so few of them still train within the national program in Utah.

Many train on their own elsewhere, and the federation did not feel it could afford to pay Parra to coach just a few athletes. It gave his job to sprint coach Ryan Shimabukuru, who must juggle both jobs and devise a way for all the athletes to flourish, though Goskowicz hopes that’s only a temporary situation.

Greenwald himself is the third executive director in a matter of months, having replaced former Park City mayor Brad Olch, who took over in an interim role when Robert Crowley left after the Vancouver Games and became the executive director of USA Waterskiing.

Olch wanted the job permanently, and told the Park Record that he believes he didn’t get it because he “pushed back on some things” conflicting with the board of directors, which has long been embroiled in assorted conflicts with various factions within the organization.

At least, the situation is not quite as bad as the one Crowley inherited four years ago.

The federation had virtually ground to a halt after Turin, with mounting debt, only one coach (Shimabukuru) and no training or development systems in place. Within a year, the organization also was consolidating its headquarters and training programs in Utah.

“That was a lot more traumatic,” Goskowicz recalled.

Many in the speedskating community believe Greenwald was a good choice as executive director and has the potential to turn things around — “we’re excited to have him,” short-tracker Travis Joyner said — even as many of his most successful athletes such as Apolo Anton Ohno wind down their careers.

Greenwald was hired in part because of his lifelong background in the sport — he competed at the Olympics in 1988 and 1992 — and his experience in a variety of roles, which he hopes will allow him to negotiate the myriad challenges he’s about to face. He said he doesn’t blame coaches, athletes and parents for being wary, but hopes they will give him the chance to prove himself.

“I have a lot of work to do,” he said. “But this is what I do in my life. This is my passion. This is more than a job for me. I live this. I care about the sport, personally. … I didn’t come here to do anything less than succeed. Otherwise, I wouldn’t be here wasting my time or anybody else’s.”

Speedskating boss up to the challenge Mixing it up

» Short-track coach Jae-Su Chun is back, however, and has been signed to coach through the 2014 Sochi Games in Russia. Long-track sprint coach Ryan Shimabukuru also remains, and will add Parra’s old duties to his job description. Mark Greenwald

» Former speedskater raced at the 1988 Calgary Games and the 1992 Albertville Games.

» Born in Illinois, he lived in Canada for 18 years pursuing coaching and administrative career.

» Ran the Calgary Olympic Oval when it produced 15 medalists at the 2006 Turin Games. Looking ahead

The Americans have won 31 medals in speedskating and short-track in the past three Olympics. But only seven have been won by athletes who are expected to return for the 2014 Sochi Games.

This entry was posted on Thursday, July 22nd, 2010 at 6:03 am and is filed under Apolo Anton Ohno, US Speedskating. You can follow any responses to this entry through the RSS 2.0 feed. You can leave a response, or trackback from your own site.

YOUR FRIEND IN HIGH PLACES

WordPress.com is the best place for your personal blog or business site.